by ByronW
Comments are off

“How many REDS could a Dubček check if a Dubček could check REDS?”  That’s a Newspaper headline from August 1969 when Russia, Poland, Bulgaria and Hungary [the Warsaw  Pact] invaded Czechoslovakia to put a stop to their leader, Alexander Dubček’s efforts at liberalising the  economy and democratising the politics. The Russians biggest fear at the time was that Czechoslovakia would  defect from the “Eastern Block”, injuring the Soviet Union’s position in a possible Third World War with  NATO! In just 2 days the invasion was over, Dubček was seized and taken to Moscow to be “re-educated”!  He dropped all his liberalisation plans and was replaced by a more pliable Soviet friendly leader. Thirteen  years earlier [1956] , an uprising of liberalism in Hungary against the Stalinist Government itself was crushed  in just 6 days by the Soviet Army. 2,500 Hungarians were killed and 200,000 sought refuge abroad.

Why these two historical extracts?

Well, the Dubček one, took place in my matric year and the second was responsible for Dr Andor Nemeth  joining attorneys “Venn Nemeth & Hart”, as a Hungarian refugee after the 1956 revolution. Perhaps the  most obvious reason for their inclusion is of course the similarities with the current Russian invasion of  Ukraine. Ukraine has borne the brunt of Soviet aggression intermittently for over a century. In 2014 it took  2 days for Russian troops [without insignia] to take over the Ukrainian Province of Crimea and go on to  complete its Russian annexation in a just a few weeks.

It seems that President Putin thought he could, within a few days, take control of the whole of Ukraine and  install his own Moscow friendly puppet government. He had denied any intentions against Ukraine despite  the massive build-up of his troops along Ukraine’s Borders. Then on 24 February 2022 he launched a “special  military operation” and ordered his troops to enter Ukraine. It is now clear for all the World to see that this  is an all-out War with devastating consequences for Ukraine and no doubt ever increasing hardship for the  Russian people as the Global sanctions against the Putin regime bite. 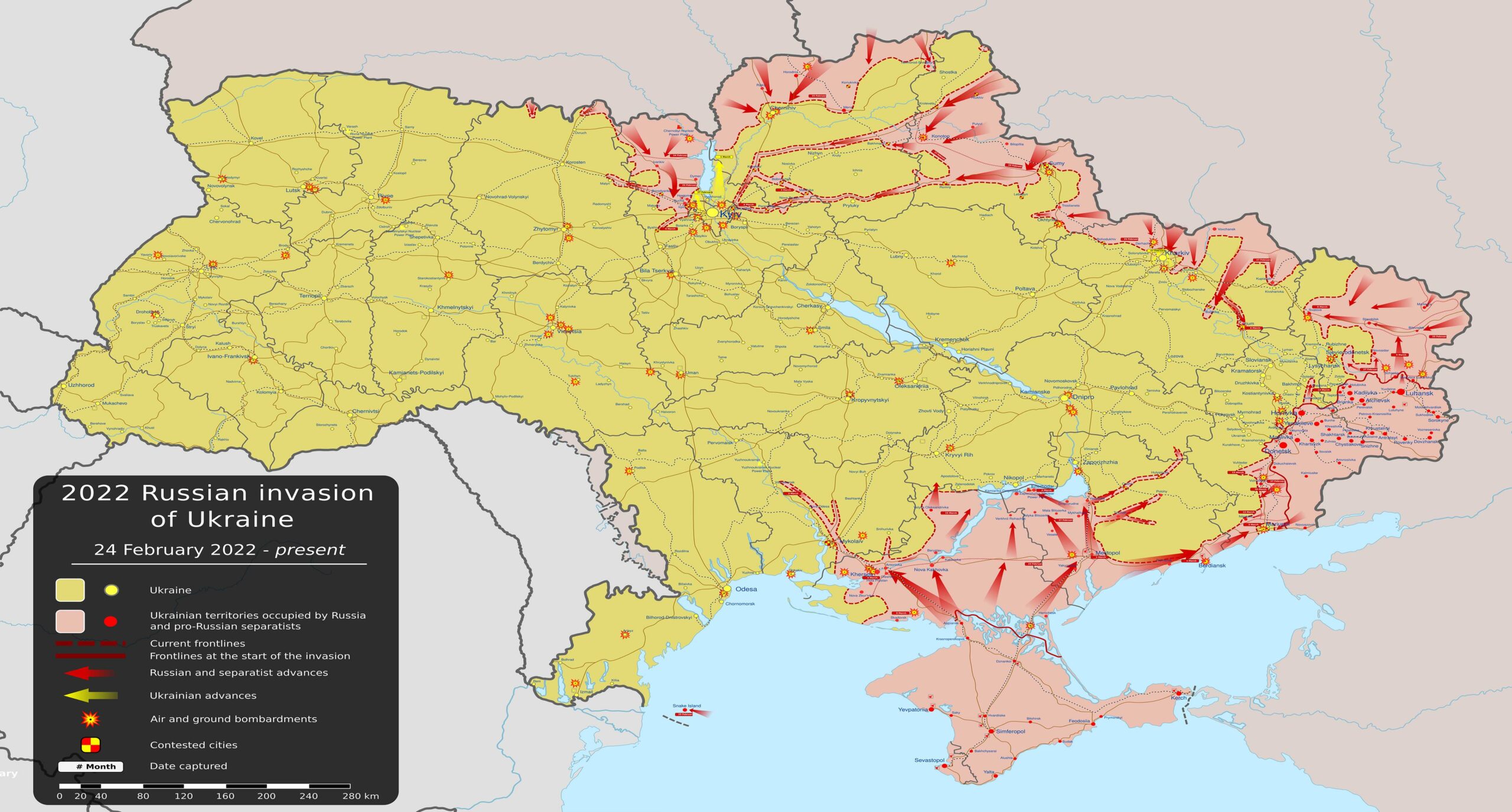 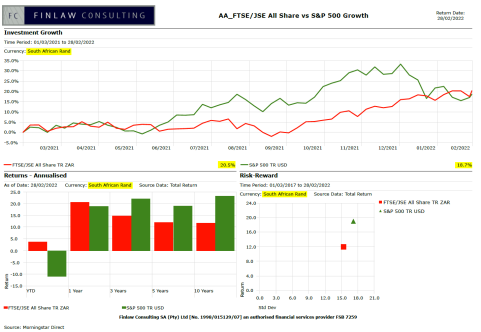 The Russian invasion of Ukraine is far from over and the impact on Global markets still has a way to go before  settling. The above chart shows the S&P500 share index in green and the RSA All Share index in red. The  highlighted percentage values are all based on their ZAR performances. The S&P500 has clearly dropped in  ZAR value since the end of the previous quarter [end November 2021] when the ZAR was R16.18 to the US  Dollar as against R15.19 at end Feb 2022. By contrast – the RSA share index is up since November – largely  due to strong foreign inflows into our Bond and Stock markets.

The table at bottom left shows the annualised performances in ZAR of both indices all the way back to 10  years ago. Investing globally has clearly been a winner in 1st world currencies and in ZAR for all periods except  the past one year.

The chart on the bottom right compares Risk [left to right axis] with Returns [up axis] over a 5 year period.  The slight increase in risk for the green triangle is due to adding the currency exchange rate fluctuations  between the US$ and the ZAR. The reward is clear – roughly 12% per annum over 5 years in the local share  index against almost 20% per annum from the S&P500 index.

Of course, these indices track pure share investing locally and abroad – while our investment strategies  combine all the available asset classes to achieve greater diversification and to reduce risk. As a result, the  performance is reduced along with the volatility – keeping us on safer tracks through these seismic events.  We had noted that as far back as end November, several of the multi-asset funds began taking profits and  increasing their cash holdings. Those that did will be well positioned to take advantage of the current  downturn in prices.

Clients who compare their portfolio values over one year and longer will appreciate the growth in values and  the resilience of their strategies, despite the best efforts of Covid-19 and the many other “disruptions” along  the way. Here is a chart prepared by Allan Gray which goes back 20 years … 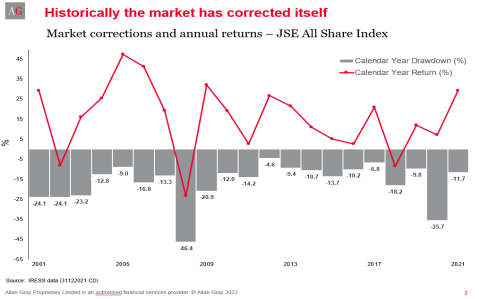 It shows how well share markets recover after falling and that these dips present great investment  opportunities. The worst thing to do is cash in and hope to pick the right time to re-enter the markets. We  have run diagnostics on all funds within our client strategies and are pleased to confirm that their exposure  to Russia is minimal – both before and after the Russian market’s fall from grace.

This table sourced from Deutsche Bank demonstrates just how quickly markets have turned after war events  in the past 30 years. So … stay the course, as we will with our own investments.