by John Wallace
Comments are off

We are pleased to report that:

Despite the best efforts of the News Media to concentrate on as much bad news as they can muster, the local and international markets have shrugged them off and continued to grow at a pleasing pace. The 2012 calendar year was a good one both locally and offshore and the first two months of 2013 have continued the trend.

The major international markets are just above or at their 2008 peaks – so have not run ahead of themselves like we seem to have here at home. It comes as no surprise that local fund management companies continue to hold the view that there is better value in the international markets than there is at home. Coronation, one of the leading fund management companies, has clearly stated its intention to actively seek value offshore and has largely taken defensive positions in its local portfolios.

A long look back over time 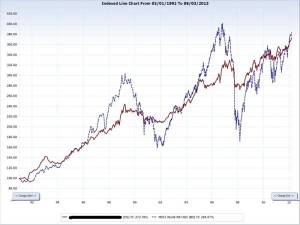 In recent discussions with a new client who is unfamiliar with investing I was asked to give an example of the actual track record of a fund over a long period of time. We were discussing the importance of holding investments in a combination of asset classes such as shares, bonds, property, cash and alternates [hedge] through properly managed balanced Mutual Funds [Unit Trusts locally]. Here is the example I gave going back just over 20 years of a conservatively, yet actively managed Offshore balanced fund that we have held in many client portfolios since the 1990’s. The name of the fund is not important [there are many with comparable results]. The blue line tracks the World share index in US$ from January 1992 through to March 2013. The burgundy line tracks the balanced fund over the same period. You can clearly see the crash we had over the Millennium and the far more violent one we had in 2008. Notice how much less volatile the balanced fund has been and that over this 20+ year period it has held its own against pure share investments at the top of the risk scale. The lesson is that by placing investments with professional fund management companies who have both the resources and the research to make rational, informed decisions – you remove emotion from the equation and have significantly better prospects of growing your wealth over time.

Save for a few issues, almost a non-event from an investor’s perspective. One is the continuation of last year’s Budget Plan to radically revise the different retirement products in the market. These are to be welcomed as long as the rights already accrued under the old laws are preserved. Another is the apparent threat to Trusts. We have had many threats against Trusts going all the way back to the Margo Commission [1986], and those that followed. None ever changed matters for the worse … but we will wait and see what appears in draft legislation before taking action.

As always please don’t hesitate to contact us for assistance.