“Oh, when will they ever learn?”

The abuse of organs of State continues unabated after the ANC’s National Executive Committee [NEC] exonerated our President from blame for the significant loss of support that party suffered in the local government elections held this past month. I am reminded of the political song “Where have all the flowers gone” written by Pete Seeger in 1955 from which the above heading is taken. Our country has such amazing potential for economic growth and the upliftment of the poor – even given the appalling neglect of key areas like education, health and security over the past decade in particular. The acceleration into the abyss since Polokwane in 2007 when Zuma was elected leader of the ANC should be readily apparent to all their supporters. It seems that many “ordinary folk” from their support base got the message and either stayed away from the polls or voted elsewhere – yet the NEC leadership did not! This despite having lost control of three vital Metros, Nelson Mandela Bay [Port Elizabeth was the heartland of the ANC], Tshwane [Pretoria is still the Executive Capital of South Africa and could become the Legislative Capital as well – replacing Cape Town which was lost to the DA years ago] as well as Johannesburg [the seat of the Constitutional Court and the country’s economic powerhouse]. I guess it comes as no surprise given the public reports that at least 60% of the members of the NEC are firmly in the Zuma “camp” … no doubt fully enjoying the “perks” that go with their affiliation. 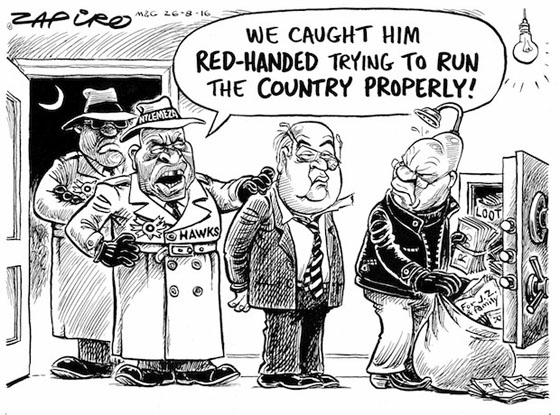 Pravin Gordhan was the Commissioner of the South African Revenue Service [SARS] from 1999 to 2009. He is credited with building and maintaining the single most efficient Government Department the country has had since the new democracy in 1994. In 2002 the National Intelligence Agency (now the State Security Agency) and SARS signed a cooperation agreement to share intelligence on criminal activities relevant to improving tax collection. In 2007, Trevor Manuel, the then Finance Minister, launched the National Investigation Unit which was later named the High Risk Investigation Unit within SARS. In 2009 Pravin Gordhan retired as Commissioner of SARS and George Magashula succeeded him. Pravin was appointed Finance Minister until 2014 when he was replaced by Nhlanhla Nene.

The timeline is important to understand – first because it shows that Pravin had left SARS in 2009 before any “issues” about its Investigation Unit broke into the Public domain – and secondly because in 2014 when news did break out, it did not take long before he was replaced as Finance Minister. Oh, and what was the breaking news in 2014? – a headline “SARS nails Zuma’s son over Fraud” – IOL News extract from Sunday Independent – 16 February 2014. Quote – “President Jacob Zuma’s son Edward is involved in a massive fight with Sars, which claims he is hocking contraband cigarettes and under-declaring turnovers to hide millions in profits”.

Investigations into the illicit cigarette trade had started in 2010. The SARS investigations into undeclared profits in the tobacco industry were highlighted in Finance Minister, Pravin Gordhan’s, 2011 Budget Speech.

In 2013 it was estimated that close to 8.5 billion illicit cigarettes were smoked in South Africa and the government lost over R5 billion in taxes not paid. Over the preceding three years this figure nearly tripled to R12bn [source – above IOL article]. Clearly investigations into this illicit trade are messing in the “Big League” with powerful forces at play to keep themselves in the game.

However, the propaganda against Gordhan is not just about the illicit tobacco industry, it is also about key parastatals including Eskom [Coal contracts – Zuma/Guptas and Nuclear deals with Russia – Zuma/Putin]; South African Airways [Ms Dudu Myeni – Zuma “associate”] – which has yet to publish its 2015 Financial Statements while it waits for a seemingly reluctant rescue of R4.5bn in guarantees from the Treasury; the Passenger Rail Agency [PRASA] probe where its Chairperson, Dr Popo Molefe, has just revealed that a close friend of President Zuma, Ms Maria Gomes, may have been instrumental in funnelling R80 million of the controversial R3.5bn abortive train tender to the ANC’s coffers [which the ANC denies having received]. Zuma’s appointed Transport Minister, Ms Dipuo Peters has been criticised for trying to put an end to an investigation into PRASA [which she denies].

Firstly, because the carefully contrived, insidious insinuations against our Finance Minister are steadily building on a narrative within the ruling party and its Zuma friendly NEC to justify the removal of Gordhan and lessen the element of surprise which the bungled attempt in December 2014 to appoint a Zuma ally, David Van Rooyen, caused in the markets. To see how effective the narrative is becoming, read this article – http://blackopinion.co.za/2016/08/30/pravin-gordhan-running-away-police/ . Mind-blowingly misguided!

Secondly and most importantly, because the shenanigans are hurting YOUR financial wellbeing and hence ours!   Our currency took a horrific knock in December 2015 – going from R14,30 at the beginning of December to touch R18,00 on the 4th January 2016. During the week after the Van Rooyen appointment, the SA share market lost over R167bn and the SA Bond market over R60bn. Following the local government elections, the ZAR had strengthened all the way down to R13,02 … then the Gordhan bashing started again and, at time of writing, the ZAR had sunk to R14,70 [closing price on 31 August 2016]! 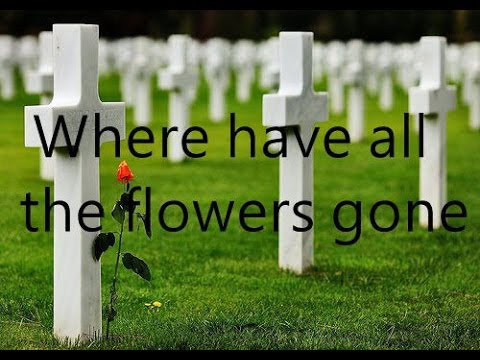 As an Investment house we have consistently favoured a bias towards investing offshore – and this has worked extremely well for our clients [and ourselves] – however for those of us who live in South Africa and intend staying here, there is no comfort in feeling smug about our good fortune while the poorest of the poor take the brunt of our government’s failings. Food inflation is running rampant; fuel costs will rise with the falling ZAR [taxi fares too]; wage demands will escalate; more jobs will continue to be lost- and so the vicious cycle feeds on itself. It is time to stand up and back all those who are trying so hard to prevent the country from being downgraded to junk status and inevitably sinking into chaos. Civil Society has the power to make a difference and we should ALL be playing a part in doing so. If we don’t, we will wake up one day – and as in the picture to the left – we will wonder “Where have all the flowers gone ….”!!

We stand with all South African residents in demanding a better future for everyone in this beautiful country.