Plunging down south to the Big Freezer

“This is your Captain speaking … we have a 10 metre [35ft] swell on the Starboard beam driven by a 50 knot South-westerly wind. Conditions are going to be rough – so please take all precautions to secure yourself and your personal items in your cabin”.

That was the news that greeted my wife and I within hours of boarding the “Akademik Shokalskiy”, a 65 metre Russian ice-breaker, on 31 December 2008 for our “once in a lifetime” expedition to Antarctica. We had planned and saved for the trip for ages – but nothing could have prepared us properly for the dreaded “Drake’s Passage” and its notorious fury. Out of 43 passengers – less than a handful made it to breakfast the next morning … but we all survived the ordeal, one way or another and arrived at the Antarctic Peninsula a few days later. 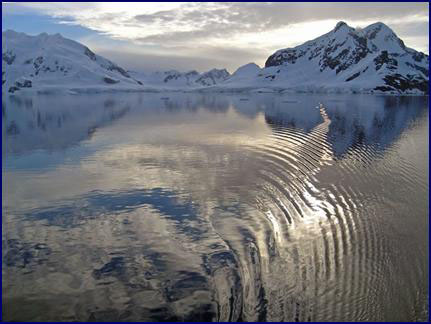 The most stunning scenery imaginable, amid calm silvery waters, greeted us each day as we explored the last truly unspoilt Continent on Earth. Penguins, seals, whales, orcas and a wide variety of sea birds entertained us. None exhibited any fear of us in our brief intrusion on their daily lives.

Why start an end of Tax year newsletter with a story about a trip to Antarctica? The parallels are there if you look for them. 2008 was more than a rough Drake’s Passage for those of us invested in the equity markets. The unprecedented plummet “South” by the World’s share markets precipitated the present “freeze” in economic activity. Global markets remain in “turbulent waters”, with the problems of the credit crunch now “spilling over” into the broader economy – from Wall Street to Main Street. All the major economies are now in recession, with certain sectors of our domestic economy also deep in the red [new car sales have reached 8 year lows]. South Africa ended the 4th quarter of the calendar year with negative growth and the 1st quarter of this year is likely to be the same, confirming that we too will officially be in a recession.

Globally, billions of Dollars have been pumped into the various banking systems in an attempt to get credit flowing again. USA car manufacturers are receiving “bail-outs”, many of our mining companies are in trouble. Daily accounts of job losses and troubled businesses “swamp” the News Broadcasts. All pretty frightening stuff to have to contend with while our decks are awash and the temperatures continue to decline.

Interest rates have been cut aggressively across the globe. In the United States, interest rates have fallen to between 0% and 0.25%, leaving the Federal Reserve little more ammunition on the interest rate front. Similarly, in the United Kingdom and the Eurozone, rates are currently down at 1% and 2%, respectively, with further cuts not being ruled out. At home, our Prime Rate has been reduced to 14%, leaving the SARB with a lot more room to cut rates in the coming months. Our Forward Rate Agreements [FRA’s] traded locally have priced in a cut of up to 4% in interest rates by the end of this calendar year. Great news for borrowers – but little joy for pensioners!

Enough of the depressing stuff I say, let’s return to the Antarctic trip! Just as we all made it through “Drake’s Passage” – so too will we make it through the present economic storm. None of us jumped ship at the height of the storm – or we would surely have perished. Bailing out of your investments, turning back on your long-term investment strategies will only deprive you of the benefits of staying the course. 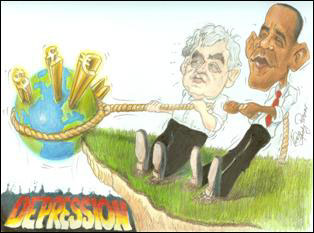 The inauguration of President Barack Obama on the 20th January provided a beacon of hope to many [both in the US and internationally] who believe that he is the best person to tackle the unenviable job of getting the US economy back onto its feet. It is still the world’s largest economy by far and seems set to begin the recovery ahead of the UK and Europe. I have every confidence that he, along with Gordon Brown and his European counterparts, will drag the Earth back from the precipice as depicted in this graphic commissioned by Coronation Fund Managers and reproduced here with their permission.

Investors often ask whether or when it is a good time to buy into this kind of market. One of Warren Buffet’s rules for investing is to “be fearful when others are greedy and greedy when others are fearful.” Of course he says this knowing that most investors are inclined to do exactly the opposite – retreating to cash when the crash has already happened and climbing into the markets when the next boom is well down the course. With the benefit of hindsight it is always easy for the protagonists of “market timing” to demonstrate how well they “could” have done by picking the historic lows and highs to prove their points of view – but in reality building a strategy around timing the markets with all the uncertainties of the future is most unwise. No one can predict the date and time of the next low point or the next high point – so the Warren Buffet’s of this world don’t bother their minds with this futile exercise – but rather get on with assessing their own objectives, their tolerance for risk, their time horizons and the relative value of investing in the wide range of asset classes and instruments available to them.

Like our Captain on the Shokalskiy, we may well need to adjust the throttles, trim our course, increase our ballast and keep the bilge pumps working while the wind and waves do their worst to distract us. So, if you are feeling anxious about your portfolio, give us a call and let’s take on the challenges together until we reach those calm silvery waters. I could write a book about our Antarctic experience – but instead will present an audio-visual evening of video, pictures and music of the voyage for those interested in attending some time later this year. Who knows, by then we may even see the first real signs of the storm abating.

This report is based on information sourced from various institutions, both local and international. The report reflects a variety of views and is not intended to convey investment advice. Please consult us to obtain specific advice relevant to your investment portfolio.