We are delighted to confirm the appointment of 2 new members to the Finlaw Team in 2015. Jane Peattie has joined us to bolster our marketing, client relationship and administration services. While she may be new to the Financial Services sector – she has a wealth of experience in marketing, relationship management and business administration, having conducted her own business, “Crackajacks“ for 4 years before selling it to spend more time with her children. Nolan Wallace has joined us, initially on a part time basis, with his valued Information Technology skills, to pilot a revamp of our bespoke client database systems which keep track of client portfolios – a critical part of our business strategy. He is completing his university degree majoring in Business Information Systems and Psychology [an interesting mix of machines and humanity]. 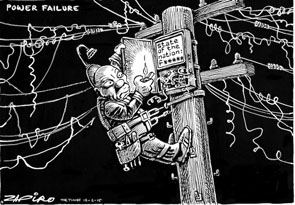 As tragic as the very public event was – we doubt that it could have been better scripted by the late Spike Milligan. As far as television entertainment is concerned – it was tops, so long as you still have a sense of humour. Of course it’s no use being flippant about it, the fact remains there were serious constitutional issues such as blatant infringements of Parliamentary protocol [“Pay back the money” and the SA Police intervention that followed], freedom of speech [the cell phone blocking saga], property ownership [farm size restrictions and no foreign ownership] etc. Perhaps the biggest disappointment of the event was best summed up by Moneyweb Editor, Ryk van Niekerk, in his article headlined “Zuma: be a leader, not a reader”.

The real crisis faced by the Nation, the Eskom saga, barely got a mention aside from the assurance that “we do have strategies in place to deal with the matter” followed by a shopping list of more planned tenders and procurements. After the entire country has known for more than a decade that the Nation faces an energy crisis, we are told that the “short and medium term plan involves improved maintenance of Eskom power stations” – and that the “long-term plan involves finalising our long-term security master plan”. Oh … and “households are encouraged to switch from electricity to gas for cooking, heating and other purposes”!

and the Oscar goes to … 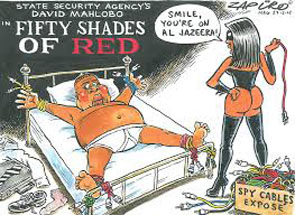 the midst of the 2015 Oscar Awards, the Nation is further embarrassed by the “Spy Cables Expose” currently featuring prominently on the Al Jazeera channel [406 on DSTV]. We learn of Jihadi training camps right here in South Africa, our spying activities on Greenpeace [at the request of South Korea], on Russia [by our State Security Agency to find out what our Military Intelligence Service is doing in a satellite surveillance joint venture] , on China [for alleged break-ins at our infamous nuclear pebble research project]. The list goes on and the likely reaction from Government will be to sign into effect the Secrecy Bill to clamp down on leaks!

Reaction from our local markets: 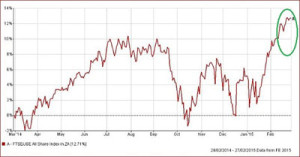 The green oval highlights the stock market’s immediate reaction to the sagas mentioned above. The opposite of what one might expect – except if you stop to reflect on the fact that our listed companies, still remain in competent hands. The big dips seen in the past year and mentioned in our previous newsletter [“Roctober” – penned by Stacey] were driven by global events … save for the subsequent early December and January dips which may well have been fuelled by our return to intermittent “black-outs” . For the Tax Year ended Feb 2015 the tail-end recovery has been most welcome with an overall return for the year of 12,71%.   In the same period the Rand has traded against the US Dollar between a strong point of R10,30 [May 2014] to its weakest at R11.89 [11 Feb 2015 before SONA]– a negative move of 15,44% between low and high. The currency decline for the Tax Year [from R10,76 on 1 March 2014 to R11,66 on 28 February 2015] was 8,36%. Our clients with their carefully devised local and global investment strategies will be relieved by their tax year-end reviews despite the turmoil of the past year and returns well below those of the previous three years.

While something of a yawn after all the other excitement we have had in February, there are meaningful changes in the pipeline. Perhaps the best news for investors is the substantial further relaxation of Exchange Controls – local adult residents can now take R10-million per annum offshore with a Tax Clearance plus a further R1-million [no clearance required] free of the restrictions previously applicable to the annual discretionary allowance. Despite the weak Rand we encourage our clients to seriously consider seeking investment opportunities abroad to improve their portfolio diversification. The bad news was the increase in the tax rates by 1% and the opportunistic increase of 80,5 cents per litre in the fuel price.

“Always look on the Bright Side of Life …” [Eric Idle – Monty Python]. We have the privilege of living in a wonderful country which, despite the overabundance of negative news on TV and the Newspapers, still has great potential and vast natural resources. Political pressure for change is mounting and interesting times lie ahead – so keep your sense of humour while investing wisely for the future.