by John Wallace
Comments are off

Aided and abetted by a jaundiced press obsessed with negativity, it comes as no surprise that many South Africans are decidedly uncomfortable about the country’s future. While we have no wish to paint over the very real social, political and structural problems the country obviously has, we

strongly believe that a sense of balance is a prerequisite to forming proper judgements about any state of affairs and the decisions which may flow from them.

It is all too easy to slide into “When-We” mode – reflecting on the so called “good times” of the past – while berating the “bad things” of the present. Advancing age compounds the problem as short-term memory fades while distant ones come to the fore. The healthy human brain seems programmed to archive the old unpleasant memories and enhance the recollection of those past happy events which brought us some cheer.

Nevertheless, we live in the “here and now”, so must judge our surroundings by the signs and signals presently being received in order to assess our position and influence our state of mind.   Sadly, this is where matters all too often go horribly wrong. Pandering to a less than admirable human trait, the print and broadcast media feed on our innate appetite for “bad news”. The problem is exacerbated by the modern technological era we live in where local and global disasters re-occur hourly/daily on our television screens in our living rooms.

Well, here comes some good news! The World Economic Forum conducts incredibly detailed and objective studies on a wide range of Global economic issues. One of their annual publications is their assessment on Global Competitiveness of the 144 countries they are able to properly survey. While South Africa does score badly in several of the 114 indicators, a balanced synopsis reveals that:-

The World clearly recognises that our corporate business sector is in good hands, well managed and properly governed – a lot more than can be said for our institutions of State. For those interested, a link to a copy of the summary for South Africa appears at the foot of of this newsletter.

BACK TO THE FUTURE – Making sense of the here and now:

The past quarter [June, July and August 2015] has presented some real global challenges which have caused high levels of fear in the world markets. The humanitarian crisis continues unabated in the Middle East and in swathes of Northern Africa now manifesting in the largest human migrations seen since the Second World War. Our TV screens are filled with boat loads of refugees being rescued in the Mediterranean, the awful tragedies of capsized and overcrowded vessels, the unconscionable criminal acts of human traffickers extorting large sums of money from desperate people for “safe passage” into Europe.

To compound the problems, China would seem to be in worse trouble economically than most analysts had predicted. An early sell-off in their stock market led to government interventions which seemed to help until they devalued their currency against the US$ twice in one week which triggered China’s “Black Monday” on 24th August 2015 when their market plunged by close to 10% in a single day. This sparked sell-offs in markets around the globe and especially emerging markets such as ours. For the longest time, the world took its cue from Wall Street, hence the saying that “when America sneezes, the world will catch a cold”. Now it seems that the world’s second largest economy, China, has become the new barometer.

What we easily forget though, or perhaps did not know, is that from September 2014 to June 2015 [just 10 months] the Chinese stock market more than doubled – so clearly Chinese retail investors had jumped on the bandwagon leading to a bubble that had to pop sooner or later. Our own stock market in that period seemed to be defying gravity – so the correction that has followed was not entirely unexpected, although it did come sooner than many expected. 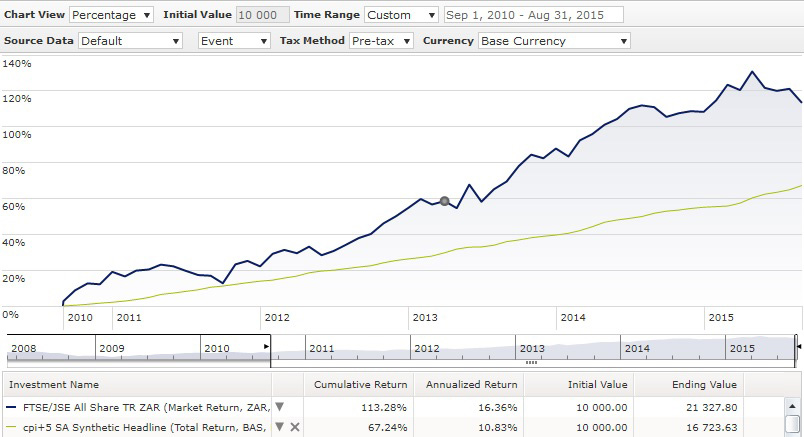 To keep matters in perspective, look at the chart on the left which shows our 5 year returns on the South African stock exchange [blue line] – 112.28% or 16,26% per annum against SA inflation plus 5% [green line] – 67.24% or 10,83% p.a. Notice also the correction since end April 2015 and the fact that similar downturns took place in prior periods. Long-term investors need to keep a balanced view of current events and take comfort in the fact that over time market normality returns, good companies take the necessary steps to re-align their business where needed and once again make profits.

We have been saying since 2010 that South African investors 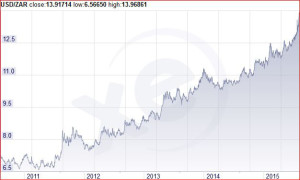 would be well advised to include offshore investments in their strategies. We may have called it a little early, but the chart on the right says it all. Clients who have been invested with us in the past 5 years will, despite the recent market corrections in the last quarter, be pleasantly surprised at how their portfolios have held up over the long-term. A recent and detailed currency survey shows that in the past 14 years the ZAR has declined in line with the inflation differential between us and our main trading partners in Europe, the UK and America. That makes the prospects of a sharp ZAR recovery seem unlikely in the short-term. Given the pessimistic view of our country both within the borders and outside, we will likely be on the back foot until and unless meaningful changes take place on the domestic front.

Please don’t hesitate to contact us if you are concerned about your portfolio. We are more than happy to discuss any necessary tweaks to better suit your current circumstances.