The late Sir John Templeton once said – “bull markets are born on pessimism, grow on scepticism, mature on optimism and die on euphoria”. According to Wikipedia, pessimism is “… a painful state of mind which negatively colors the perception of life, especially with regard to future events. Value judgements may vary dramatically between individuals, even when judgements of fact are disputed…”

Evidence shows that pessimism amongst investors remains understandably high. Certain market commentators, while recognising the vast amount of negative market data still around, are beginning to view the future with a little less trepidation [knowing that history tells us that markets, which are forward looking, tend to start recovering about 70% of the way through a recession]. They are choosing to rather turn their attention to the “green shoots” [the latest buzz word in our industry] that have started to present themselves in certain areas of the global economy. 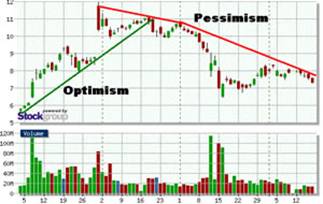 Having said that, there is another school of thought that believes that these “green shoots” are simply a short term phenomenon and that we are more likely to have a “W” shaped recovery. Their view is that we are likely to test lows once again [taking us from the middle of the “W” to the second “low”], before seeing more sustainable signs of a recovery coming through.

Unfortunately, confirmation of a market bottom can only present itself after the fact and is therefore impossible to call at the time. A recent article by Cees Bruggemans [FNB Chief Economist] touches on this very point. He suggests that one also needs to consider a range of other factors, including factors such as leading indicators. An example of a leading indicator often used is the stock market, which “has quite a good history of turning up well in advance of the general economy”. One complication of this, Bruggemans points out, is that our local stock market moves “in union with foreign markets, mostly walking to the drumbeat of New York. But then our economies today are also more interrelated than ever, to a point where global events dominate local ones.”

In the past, our economy had a lag time of about 18 months, but this gap has narrowed quite considerably, with the lag time often now being more like 6 to 9 months. Bruggemans states that the “US leading indicator turned up as of December, with the US GDP expected to start rising again from 3Q2009 [if not 2Q2009].” He goes on to report that our domestic Reserve Bank leading indicator “falling since March 2007, turned up this February, only two months after its US equivalent. Add six to nine months [4Q2009] and we could see the broader economy turning up as well.”

If we step back from the “green shoots” for a moment, it is sobering to note that GDP in the US declined by an annualised 6.3% in the fourth quarter of 2008 [4Q2008] and by an annualised 6.1% in 1Q2009. However, Bruggemans points out that “US businesses cut inventories and capex heavily [largest such cuts in 30 years], explaining 80% of the GDP quarterly decline.” In contrast, consumer spending in the region increased by 2.2% in 1Q2009, after declining sharply in the second half of 2008 [2H2008]. Bruggemans is heartened by both sets of data and is currently of the view that the “US economy appears on course for GDP recovery in 2H2009”. However, he warns that there are a number of headwinds to look out for, which include “a secondary wave of weakness, induced by increased unemployment… Credit tightness could be a near term impediment, possibly delaying things somewhat. Another imponderable is Mexican flu, although already appearing less of a threat….”

Interest rates in developed economies have been slashed aggressively in response to the global market turmoil, with policymakers in the US being the most aggressive. The current view is that the US is likely to lead the global recovery. Both the United Kingdom and Europe, on the other hand, were slower to cut rates, with the Eurozone even raising rates before following the downward rate trend. As a result of not taking their “medicine” sooner, the Eurozone could well take longer to turn the corner. On the domestic front, our rates have been reduced by 4.5%, with the expectation of a further 0.5% to 1% reduction before year-end. The Reserve Bank Governor has recently appealed to private banks to reconsider the margin between our Prime rate [rate used by banks] and the Repo rate [rate at which the Reserve Bank lends to the domestic banks in the private sector], saying, “there is nothing automatic that says the spread must be 3.5%”.

At home retail sectors still don’t appear to have reached a bottom, but the benefits of a sharp decline in domestic interest rates should become evident in coming months. Retail sales for March came in at a disappointing 5.3% year-on-year, compared to 4.4% in February. According to Bruggemans, “85% of our retailers have enjoyed remarkably benign conditions in what remain severe circumstances globally [though motor trade furniture retailers and building merchants suffering severely]”.

When asked about the market in October last year, Warren Buffett said “I haven’t the faintest idea as to whether stocks will be higher or lower next month – or a year from now. What is likely, however, is that the market will move higher, perhaps substantially so, well before either sentiment or the economy turns up. So if you wait for the robins, spring will be over”. While Warren Buffett makes an extremely good point, it is clear that many investors [both domestically and abroad] are still rather nervous of moving back into the market at this stage. This is evidenced by the latest statistics released by the Association for Collective Investment Schemes [unit trusts] in South Africa [as at 31 March 2009] which indicate that slightly more than one third of funds invested in unit trust funds are currently held in money market funds. This excludes funds held in bank deposits / investments. While this may seem high, these statistics are in fact very much in line with investors abroad.

Many investors will be asking themselves, “where to from here?” While this may seem like a fairly simple question, the answer is a little more complicated. Truth be told, even the most seasoned market commentators don’t know when the markets are likely to bottom, or whether they have in fact bottomed in this current cycle. 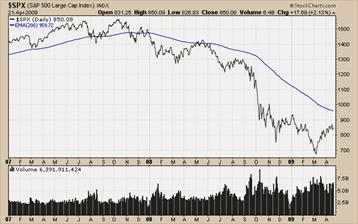 Our view is that, while it seems that the worst may be over, there is still too much uncertainty about to believe that we are totally out of the woods just yet. We need to remember that, “green shoots” or not, most economies are still in recession, including our own. As such, we wouldn’t be surprised if the markets retraced some ground. However, it is interesting to note that, since the lows in early March the S&P 500 Index [USA] and the JSE ALSI [RSA] have returned more than 30% and 20%, respectively, in their respective base currencies.

Returning to our opening quote from Sir John Templeton, we believe that right now we may just be seeing the investor mood shifting from pessimism towards scepticism – a good sign for those with long-term investment time horizons who can afford to take advantage of the low equity prices even if the “W” shaped recovery does show its form.

“Many an optimist has become rich by buying
out a pessimist.”
Robert G. Allen

This report is based on information sourced from various institutions, both local and international. The report reflects a variety of views and is not intended to convey investment advice. Please consult us to obtain specific advice relevant to your investment portfolio.