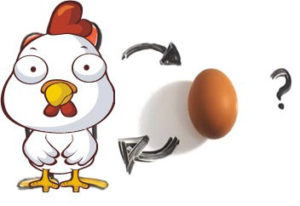 It’s amazing how often we encounter this age-old paradox. You can’t get a job without experience, but to get experience you need a job! There are so many conundrums like this which are inhibiting the growth of our economy, particularly within the areas controlled by our Government. To boost the economy, Government needs to create jobs – yet to save the economy, Government needs to shed jobs in the public sector and especially in State Owned Enterprises like Eskom and SAA. 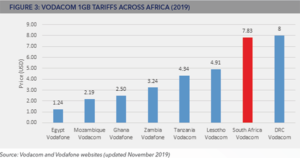 A topic presently under debate which can have a profound impact on our economy is lowering the cost of data for all in South Africa. The Competition Commission has just ruled #Data-Must-Fall and has given the Duopoly of Vodacom and MTN two months to oblige. The pricing facts speak for themselves. These charts compare the prices we pay in South Africa per 1 Gigabyte in US$ compared to other African countries in which Vodacom and MTN operate. Clearly we South Africans are paying a premium and it is high time our prices were reduced. So that’s the “Chicken” part of the equation – but where is the “Egg”? … 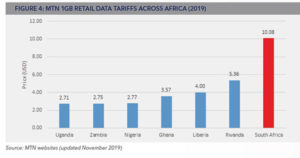 “Safely” nestled in yet another Government manipulated body by the name of ICASA – the “Independent” Communications Authority of South Africa. The issue here is the release of Spectrum – the licensing of radio frequencies to Mobile Operators for use in their data offerings. Our mobile networks are hampered by the overburdened frequencies in use and badly need more spectrum to be made available for expansion.  “The licensing of high demand spectrum is one of the critical components to facilitate deployment of digital infrastructure to ensure that all South Africans realise and participate meaningfully in the opportunities emanating from the Fourth Industrial Revolution” (quote from the Acting Chairperson of ICASA.)

In July 2016, ICASA invited participants to apply for spectrum licenses which would boost the roll out of faster and cheaper LTE broadband. However, then Communications Minister, Syabonga Cwele, went to Court to interdict and set aside the ICASA planned action. More than three years have passed by since then with zero progress – but in November 2019 ICASA surprised the telecommunications industry with the release of an Information Memorandum [which includes the 3.5GHz band] ahead of a planned auction of spectrum likely to take place in 2020. If not “de-railed” again – we can look forward to positive progress next year!

Right now, there are more countries with civil unrest than ever before. Leaving aside our own country, which until now has rather localised unrest in the form of municipal service level protests – here is a list of some of the countries facing ongoing protest action: – Hong Kong, Chile, Indonesia, Netherlands [farmers], France, Peru, Haiti, Lebanon, Iraq, Iran, Israel, Argentina, Bolivia, Spain, Guinea, Ecuador, Cameroon, Egypt, and Kashmir! These are all serious disputes between the citizens and their respective Governments.

We can add to that more than 150 countries which have recently experienced Climate Change protests driven largely by the youth. Vested interests and corruption seem to be at the centre of all these protests [civil and climate change]. Young folk in particular are angry about how politicians are failing to deliver on their promises and instead filling their own pockets while clinging on to power. Sounds all too familiar!

While the World may seem to be on fire [literally in parts like the Amazon, Canada and Australia etc.] there are positives to be taken from what is happening. Corrupt Governments are falling, and far more attention is being placed on climate change by World leaders. Add into the mix the Fourth Industrial Revolution and it is clear that Civil Society is more empowered than ever to curb malpractices and be a force for positive change.

Sustainability is the name of the game and becoming an ever increasingly important aspect of investing. Fund Managers are paying far more attention to investing in companies whose activities do not unduly harm the planet and avoiding those where there may be a whiff of corruption or mismanagement. Threats bring opportunities like investing in renewable energies, recyclers of waste products, disruptive technologies and technology driven education.

So … a stimulus from ICASA on spectrum, price reductions from Mobile Operators, faster and more widely accessible broadband data [powering our journey to the Fourth Industrial Revolution] … coupled with the arrest and prosecution of corruptors and the corrupted [may Bongani Bongo be the first of many] – will augur well for 2020. 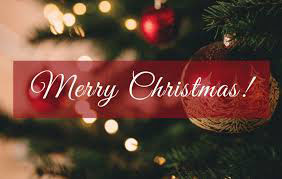 We take this opportunity to wish you and your families a very Happy Christmas and a particularly prosperous 2020. Thank you for your continued support.

John Wallace and the Finlaw Team