“For myself, I am an optimist – it does not seem to be much use being anything else.”

It seems that once again we have turned course on interest rates – with a surprise hike in January 2014 and expectation in the market of a further 2% in rises over the next 18 months! There are sharp differences though between what is happening now and the low interest rates of 2004 when the local stock market was low, the currency was strong, we had no deficits and we had relative political stability with President Mbeki assured of a second term. Right now we have record highs in our market, a rather weak currency, a double deficit and an unhealthy amount of political turmoil for the forthcoming elections in May.

Jonathan Shapiro sums up the election hype around manifestos rather well in his cartoon on the left. The inevitability of the outcome – the fact that the ANC will return as the majority party – is as certain as ever, however there are new dynamics in the political landscape which could see some significant shifts on voter patterns. There are opportunities for opposition parties in a higher degree of voter apathy than usual among traditional supporters of the governing party. Much will depend on voter turnout from supporters of opposition parties. If voter apathy is consistent across supporters of all the Parties – our proportional representation system will ensure that nothing changes. Make sure you vote!

While we are seeing a build-up in parties well to the left of the ANC, it is unlikely that they will garner sufficient support in this election to cause an upset. There is still a great deal of suspicion about the secrecy of the ballot and the one positive about the “cadre gravy train” enthusiastically promoted by the ruling party, is the fear factor it creates in the minds of those still hoping to benefit.

Economics and Politics are inexorably linked – hence the comments above. One thing the stock markets despise the most is uncertainty. While we, in our home country, understand the dynamics better than foreigners, it is the latter who own more than half of our shares and bonds. In the result, the next quarter in our markets is likely to be fairly directionless unless deeply disturbed by international events.

The markets in the past year:

Despite the perpetual focus on negative events in the local and global media [I personally no longer subscribe to a morning newspaper – I prefer to start my day without reading about murders, rapes, corruption, conflicts, incompetence etc. – see the leading quote to this article] the share markets have in fact been kind to investors who have kept their heads and remained invested. 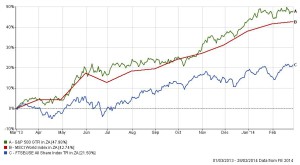 Here is a chart showing that our local share index [in blue] produced a positive gross return of 21,50% while the Morgan Stanley World Index [in red] gave a stunning return in ZAR of 42,74% headed by the American S&P 500 share index [in green] of 47,98%. If you had taken notice of the doom and gloom about the USA in the early part of last year and run for cover – you would have missed some amazing returns. The Democrats were at loggerheads with the Republicans about budgets and deficits with the press striking fears of a complete meltdown. Yet sense prevailed and solutions were found.

The decline in the ZAR played a large part in the offshore returns reflected above – but the S&P 500 did return 25% in US Dollars, so our currency decline contributed less than half its performance. Most currency commentators believe that the Rand is oversold and should strengthen somewhat – a trend that is already evident. However, none that we have contact with believe it will return to the levels it enjoyed 2 years or so ago. Even at current rates our local fund managers still see better value in stocks overseas and continue to invest as much as they are allowed to offshore.

As was the case at the end of February a year ago – we trust our clients will enjoy the good news from their annual reviews of the strategies we have put in place for them. There are challenges ahead – but life with optimism is so much more rewarding than being driven by fears. Take a leaf from Sir Winston Churchill, who at the time was faced with the World’s biggest disasters – WWII.

As always please don’t hesitate to contact us for assistance.